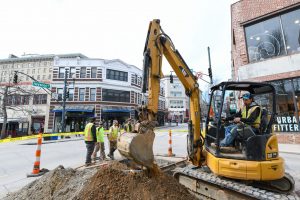 “The Haywood Street project is a prominent streetscape project for the City of Asheville with much historical significance,” said Mike Norris, PLA, Director of Land Planning and Recreation at McGill. “This project is providing a safer sidewalk for the businesses, visitors, and residents, and a more pleasant pedestrian experience overall.”

The streetscape has been planned to provide improved Americans with Disabilities Act accessibility and correct grading issues, as well as curb extensions, street trees, benches, and trash cans. Also, the “Shopping Daze” sculpture will be relocated to a more prominent location and decorative brick bands will be added to match other bands throughout the downtown area.

“The site furnishings will provide an updated and cohesive look to the busy street,” explained Carrie Cranwill, PLA, EI, Landscape Architect and Engineering Associate at McGill. “Also, outside the downtown library, there will be an enhanced urban area with seating and tree plantings.”

Water and sewer main replacements are currently underway this month in Downtown Asheville as a part of the Haywood Streetscape project. Within weeks, construction is slated to begin on the streetscape improvements portion of the project. Outside of Haywood Street, sewer replacements will include parts of College Street, Walnut Street, Flint Street, and Page Avenue. 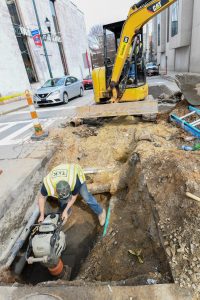 For Downtown Asheville, Haywood Street is a hub for activities and city happenings, making the improvements that much more impactful.

“Everything that represents Asheville culture happens on Haywood Street,” said Jim Ford, McGill Project Planner. “This is an active space alive with the sights, smells, and sounds of a vibrant community.”

The close quarters of this area make it important to utilize every square foot of the corridor in the most thoughtful and creative way possible.

“Haywood Street is a very civic area with a lot of opportunity,” Ford stated. “We considered the street almost like a sacred space with deep roots in downtown’s history. Our team felt a responsibility to honor that history.”

Mike Norris explained that while planning the construction phase, his team considered the vast amount of people that use the street, including shoppers, workers, residents, buskers, and visitors.

“Due to the high activity, our team worked with City staff to develop a deliberate and methodical construction sequence in order to have as little impact as possible to the surrounding area during construction,” said Norris.

To ensure that the local businesses are not heavily affected by the construction, the Asheville Downtown Association (ADA) is also currently hard at work. The City of Asheville and ADA have partnered to provide marketing assistance and wayfinding for businesses impacted by the Haywood Streetscape project.

“The main element of the marketing campaign is signage letting both drivers and pedestrians know that businesses on the street remain open and accessible throughout the project,” said Meghan Rogers, Executive Director of ADA.

The ADA will also be engaging local media and working with groups like Explore Asheville Convention and Visitors Bureau, Asheville Grown Business Alliance, and Asheville Independent Restaurant Association to share messaging through their channels.

“We hope that this campaign will entice both locals and visitors to visit affected businesses to help them get through the disruption of the project,” Rodgers described. “Once the infrastructure project is completed, Haywood Street will be one of downtown’s finest and will benefit all businesses on the street.”

To find out more about the Haywood Streetscape project and to receive weekly updates, visit: www.ashevillenc.gov/haywoodstreetscape.