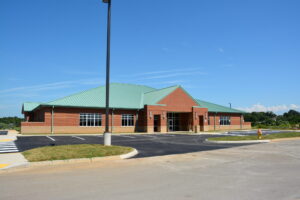 After more than 50 years in various buildings, the Jefferson City Library has a new state-of-the-art building to call home. The 16,000-square-foot, $3.1 million facility has approximately five times as much square footage as the previous building, allowing staff to increase programming offered to the public. Book shelf space has been tripled, and there are twice as many public access computers available. In addition, the library now has a conference room that can accommodate 300 individuals, as well as an after-hours meeting space.

McGill Associates was hired by Jefferson City as the program manager for the programming, design, bidding, and construction oversight of the new library. The project consisted of the civil site design that included site layout, grading plan, stormwater conveyance design, and utility service extensions. Providing pedestrian connectivity from the new library to City Hall, the Fire Department, and the Police Department was an essential feature of the site design. The project also included stormwater pollution prevention plan permitting and shop drawing review. Once construction started, McGill Associates was the main point of contact between the City, contractor and architect, coordinating shop drawings, requests for information, and pay applications.

To reduce solar heat gain and glare in the main library area, the City installed View Glass in the east and south facing windows. The glass intelligently changes its tint state based on sun light levels and time of day.

Director Anjanae Breuland says the new facility has drawn new and old patrons alike. “We are having people who have not been back to the library in over a decade return, as well as neighboring County residents coming in for a card. It feels great to be here,” she explains. “The facility is beautiful, spacious and welcoming. It is situated in a place that makes the most of the view.”