The North Fork Water Treatment Plant (NF) has had the privilege of serving the greater Asheville area since 1955. This is the year the dam and water plant were completed. Since that time the North Carolina legislature passed the Dam Safety Law and over the decades supplementary Administrative Codes have been put into place, therefore the NF Dam was required to pass and store the Probable Maximum Precipitation (PMP) storm event due to its classification as a “very large high hazard” dam. The PMP storm would produce 34 inches of rain in a 24-hour period. The original principal spillway was not able to meet the current regulation without the use of a Flood Operations Plan (FOP). The FOP was a temporary fix until a more permanent solution could be found. Other aspects of the dams that also needed to be improved were: 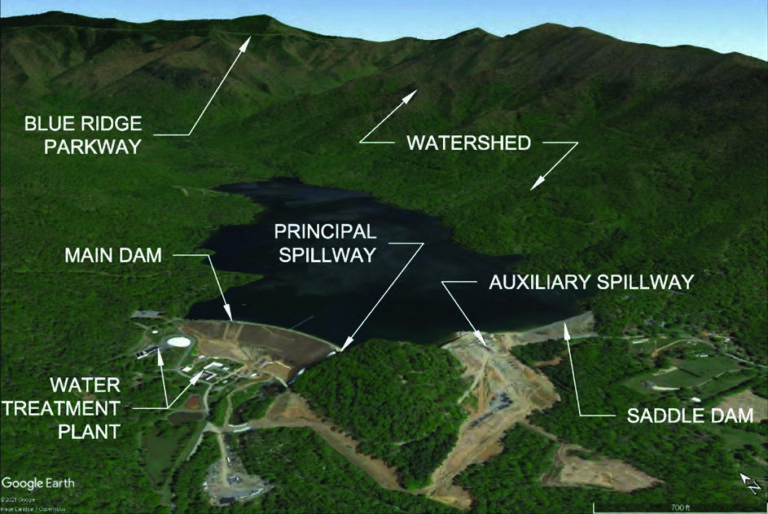 Beginning in 2012, the department began to look at different types of spillway designs and improvements to meet current regulations. Schnabel Engineering had been inspecting the dams for the department and had overseen small improvements. Due to this knowledge and their area of expertise, Schnabel was chosen to provide options and then engineering services (design, pre-qualifying construction companies, bid-ding, resident engineering services and construction over-sight) for the project.  In 2014 the Tennessee Valley Authority (TVA) began updating the rain data to provide more accurate PMP values to that region. Schnabel requested that the French Broad River Basin be included in the study, which proved to be a valuable asset to the design team. Once the data was available, the City of Asheville used the information to request an updated PMP amount from NC Dam Safety. The PMP volume went from 34 inches to 28.4 inches for a 24-hour period thus reducing the total volume of water the spillways would need to pass, limit the environmental impact, and reduce construction costs. A labyrinth design was chosen, with the final design being the first Fusegate spillway in North Carolina. This design reduced the spillway width by 100 feet; reducing excavation, construction time and costs.

Aspects of the project:

The Fusegate design provided more linear space for water to spill into the chute. The Fusegates are activated (water begins to spill over the Fusegates) when the principal spillway can no longer handle the rise in lake elevation, at the 200-year storm event. Each Fusegate is 16 feet high, 12.5 feet deep and 25 feet wide. The design allows for each Fusegate to fail (tip) at specific reservoir water surface level (elevation), thus progressively increasing the outflows during an extreme flood. Scarlett Kitts explains, “It was important to design the Fusegates to fail within a narrow range of reservoir levels. Failing too early would result in frequent replacement of the Fusegates and unnecessary lowering of the reservoir. Failing too late or not failing at all could result in overtopping of the earthen embankments, and ultimately lead to a breach of the dam.”

Fusegate – details on how they “tip”

Buttressing and Collection of Seepage from the Earthen Dams

Effective use of materials was designed into the project. Both the main and saddle dams needed buttressing for semantic stability so the large amount of soil that needed to be removed for the construction of the Auxiliary Spillway was used for this purpose. Other positive outcomes included less fuel usage, less air pollution and reduced impact to the environment as all the necessary soil was onsite.

New filter drains, collection vaults and weir were installed to allow for the natural seepage of the earthen dams to be collected, volume measured, and clarity recorded. Instrumentation was installed at both earthen dams, sidewalls, and piers of the Auxiliary Spillway and along the soil nail wall installed near the Auxiliary Spillway. The data from these monitoring points is stored in a Sensemetrics software program and is monitored for irregularities by staff of the watershed and Schnabel Engineering.

Rehabilitation of the Principal Spillway

The three original tainter gates were replaced with two concrete weirs and Obermeyer gate in the center bay, which will make the clearing debris easier. To address concerns of the unknown soil types, no seepage drains and the potential for cavitation towards the bottom of the steep chude of the principal spillway; an eight-inch thick reinforced concrete overlay was installed. It was quite a feat to secure rebar on a 40% grade and ensure that the concrete cured at a rate that would not allow for sloughing.

Limiting the size of the auxiliary spillway to achieve the smallest environmental impact meant not only looking at the design but incorporating other aspects of the dam system. A four-foot parapet wall was added to the main dam and the saddle dam was constructed to match the same elevation. The wall allows for attenuation of flood waters, allowing the lake to rise without overtopping the earthen dams.

New FRP platforms, intake stem guides, and a ladder were in-stalled in the tower. The tower house was reinforced with a 3.5 foot high concrete ring at a thickness of 1.5 feet to brace the existing brick walls and prevent the Intake Tower from flooding during a very large storm event. Also added was a hinged lip seal mechanical flood door on the outside of the tower doors. The catwalk to the tower was improved with the removal of the rotting wooden decking and the addition of marine grade no-slip decking.

The addition of soil for the buttressing of the main dam meant the vault access to the conduit / tunnel had to be moved. The new access building allows for easy entrance and work. Improvements included better lighting with sky lights, FRP railings and staircase, easy access to intake sample lines, good drainage for any moisture that ac-cumulates and a drier environment which were all achieved with this aspect of the project and made this area much safer for staff to work. It should be noted that during this aspect of the project the raw water line feeding the treatment plant was disconnected. The contractor improved on the original engineering design for raw water to be pumped from the lake and into the flocculator, which was one of the most challenging aspects of the project. Once the temporary raw water and chemical feed systems were installed, tested and modifications made, the treatment staff had to take an active role in monitoring and addressing pretreatment issues from this temporary system. Staff did an amazing job and learned more about the various ways to keep the plant functioning and their own capabilities.

The project broke ground in November 2017 with Phillips and Jordan as the contractors for this large endeavor. Schnabel provided a Resident Engineer to oversee the daily activities and act as the Owners’ Representative. Schnabel also provided an internal Project Manager to work with the contractor, Schnabel and the City of Asheville on work change directives, schedule, meetings and pay applications. Various other support staff were necessary from Schnabel and Water Production to make the project a success.

The project was substantially completed on December 12, 2020 with the final ribbon cutting held on a beautiful fall day, October 22, 2021.

The American Society of Dam Safety Officers (ASDSO) awarded the project the National Rehabilitation Project for 2021!

Thank you to NCWOA and Leslie Carreiro for allowing us to share this article with you. We appreciate NCWOA’s dedication to “providing knowledge, skills and educational opportunities for drinking water professionals; develop working relationships with other water treatment organizations; project a positive image and communicate the importance of safe drinking water.”

Note: McGill worked on many key elements of this project throughout the past several years. Our team provided field survey services, erosion control design and permitting, and mechanical and electrical design of several project components. Our water and wastewater engineers designed the improvements to the 36-inch raw water line and 30-inch drain line that extend through the dam and to the treatment plant and stream discharge, respectively. This included the design of a new structure to provide access to the conduit vault that was lengthened through the new embankment, so plant staff had safer and easier access to the lines, sample taps, chemical feed taps, etc.