The North Carolina Wildlife Resources Commission held a groundbreaking ceremony on May 21, 2021, for the Rhodes Pond Dam project in Cumberland County. Rhodes Pond, a recreational impoundment along the Black River since the 1700s, became an issue for the community in recent years since the dam was breached by several storms, including Hurricane Matthew in 2016. With the help of funding sources like FEMA Disaster Recovery, the improvements and additions to the Rhodes Pond Dam will help to mitigate future flooding, and the area will once again become an outdoor recreation destination for residents and visitors alike.

Around 40 people were in attendance at the ceremony, including the mayors of both the Town of Godwin and the Town of Falcon, as well as state representatives, numerous personnel from the NC Wildlife Resources Commission, and members of the McGill team — Michael Hanson, PE, LEED AP (Director of Water Resources), and Dori Sabeh, PE, GISP (Project Manager) — who have been responsible for leading the design and preliminary work on the project. 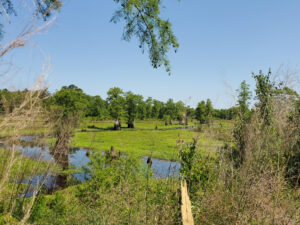 Several public officials and representatives from the Wildlife Resources Commission spoke on the positive impacts this project will have on the area. Mayor Turpin of Falcon shared his excitement about the future of the project, in addition to paying his respects in a moment of silence over the lives lost due to flooding in the area. Representative Szoka noted the extensive effort throughout the permitting process, as well as the contribution from all stakeholders to see this community gem restored.

“It’s been a long road, but we are glad to say we have everything in place to get this job completed so that the community and visitors can enjoy this recreational area for many years to come,” stated Gary Gardner, chief of the Wildlife Resources Commission’s engineering division.

Many McGill staff and subconsultants have been involved in the Rhodes Pond Dam project, to date, and will continue to play a large role in final construction. Throughout the project so far, we have been responsible for the preparation of hydraulic modeling and design drawings, technical specifications, cost estimation, permitting, bid documentation, and coordination with FEMA for the installation of a (185’ x 80’) six-cycle labyrinth weir with an 8° wall angle and half-round weir crest to replace the existing spillway and accommodate the 500-year design event.

“The Rhodes Pond project has seen many changes in direction since the original breach occurred in 2016, and we represent only part of the team that has shepherded this project to this point. We are glad to have been able to contribute to the project’s successful design and permitting and look forward to getting construction completed to open this desirable resource to the community,” explained Michael Hanson of McGill.

With the groundbreaking ceremony, the Rhodes Pond Dam and spillway construction is officially underway. Upon completion of construction, scheduled for late 2022, the dam will not only provide flood protection for the area, but also will become an exciting attraction for outdoor enthusiasts. To learn more about McGill’s water resources team and how we can assist you on your project, contact Mike Hanson at michael.hanson@mcgillassociates.com or info@mcgillassociates.com.