From Rails to Trails 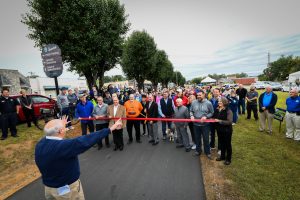 After less than two and a half years of development, the 13.5-mile Thermal Belt Rail Trail is now officially open. By converting an abandoned rail corridor into a public multiuse trail, multiple communities throughout Rutherford County – including Spindale, Rutherfordton, Ruth, Forest City, and Gilkey – are now connected. 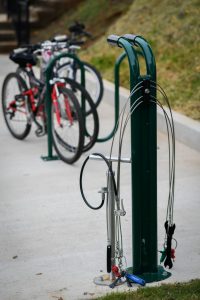 “This project reflects the highest level of intergovernmental cooperation that McGill has ever seen,” said Keith Webb, PE, Principal at McGill Associates (McGill). In 2017, McGill was hired to prepare a master plan for the Thermal Belt Rail Trail project, and Webb was designated as the project engineer. Through public outreach and participation, steering committee guidance, and careful review of existing planning documents, our team created facility and programming goals. From this information, we designed a master plan that created a linear park for the growing population of the Rail Trail Partners.

“It is unusual to see five units of governments set aside their individual agendas or past differences and look to the future to a project that will benefit each community, enhance tourism, encourage economic growth, and provide health benefits for the entire area,” said Webb. “Each of the trail partners had a dream to see the trail become a success and believed in its benefits.”

McGill assisted the Rail Trail Partners with a presentation of the project to the RHI Legacy Foundation, which provided $4.25 million of funding for the project. 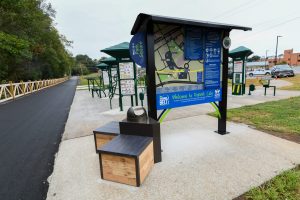 “The Thermal Belt Rail Trail was a perfect fit in the focus area of active living for RHI Legacy Foundation,” said Terry Hines, Executive Director of RHI Legacy Foundation. “Our foundation is committed to improving the health and wellness of Rutherford County citizens and the trail offers physical activity opportunities at low or no cost and is easily accessible along its 13.5-mile corridor.”

Webb said that engineers strive to work on projects that will benefit society, and for him, it has typically been providing safe drinking water and wastewater treatment projects that protect local streams and the environment. Being able to play a part in this project and seeing the incredible number of trail users and their joy makes him proud of the contributions McGill has made to the community. 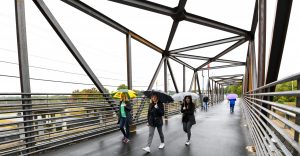 “The Thermal Belt Rail Trail was an opportunity to work on a project that would provide healthy benefits to an entire community, as well as enhance tourism,” said Webb. “Knowing that the completed project will spur entrepreneurial opportunities for new business makes me proud that we have had a positive contribution through our work.”

Tackling an expansive project this size came with many challenges, including removing the rails and crossties, as well as finding an approved final use or disposal area.

“We were blessed to have a nationwide firm specializing in rail and crosstie removal, Treno, to be the contractor for that aspect of this project,” Webb stated. “The construction phase was successful, in part, due to Site Development Corporation, the low bidder and contractor being an organization whose members live and do business in the community and who were interested in the success of the project. Site Development Corporation has pride in what it does and knows that a project done well will benefit many.”

The goal of the trail is to not only connect communities, beautify the area, and improve citizens’ health and well-being, but also to attract tourists and boost economic development. Today, pedestrians can walk or bike to a number of local destinations, such as residential neighborhoods, downtown shopping areas, schools, and recreational facilities. Along with connectivity, the trail provides small satellite parks, trail heads, educational opportunities, and other pedestrian-oriented amenities. 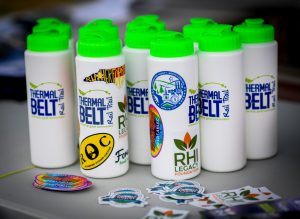 “The most important thing to date is the activity on the trail itself,” Hines said. “At any time, you will see a mix of everyone that makes up Rutherford County from young to old using the trail, and we see this only getting better in the future.”

Learn more about the Thermal Belt Rail Trail and take a virtual tour of its corridor here.