This past Saturday, June 4th, was the American Hiking Society’s National Trails Day. We have a deep respect and admiration for the outdoors here at McGill, and we are well aware that in order for all members of a community to be able to enjoy nature trails, those trails must be maintained in a way that ensures they are both safe and easily accessible.

McGill’s land planning and recreation team has years of experience in the design and planning of greenways and trails throughout the Southeast. We recognize and appreciate the positive effects trails have on their surrounding communities, including the development of new connections, promotion of physical activity, improvement of local economies, conservation of natural resources, and preservation of historical and cultural landmarks. Read below to learn more about some McGill projects that have an interesting trail element.

For the City of Lenoir, McGill assisted with the design, permitting, and construction administration for the Lenoir Greenway, a system-wide multi-use trail facility that spans approximately 4.6 miles.

McGill aided in the construction of a multi-use trail in the City of Jellico, Tennessee. The trail provides connectivity to an existing walking trail in Memorial Park and access to Indian Mountain State Park in areas where future multi-use trails are desired. The project also included a 100-foot-long wooden pedestrian bridge in order to avoid an adjacent marsh and featured drainage conveyances with stacked stone sidewalls.

In 2017, McGill was hired by the Town of Forest City to develop a Master Plan that included a linear park for Rutherford County’s growing population. For this Thermal Belt Rail Trail project, McGill created construction documents, supervised permitting and bidding, and oversaw construction.

For the Town of Huntsville, Tennessee, McGill served as the project engineer for the creation of the New River Trailhead and trail in an area adjacent to the New River and close to the downtown district. The design and construction of the project included a trailhead consisting of approximately 2,200 square yards of paved parking area and 600 LF of asphalt trail.

McGill assisted Brunswick County with the redevelopment of Town Creek Park through master planning, grant assistance, construction documents, and administration for this multi-sport complex. The park planning was focused on redevelopment to provide opportunities for all ages, abilities, and additional recreational amenities. The park also included the addition of an elaborate pedestrian trail system, which provides American with Disabilities Act (ADA) connectivity to all amenities, facilities, and the adjacent Town Creek Elementary School. McGill assisted the County with applying for the Parks and Recreation Trust Fund (PARTF) grant to help fund the implementation of the Master Plan. 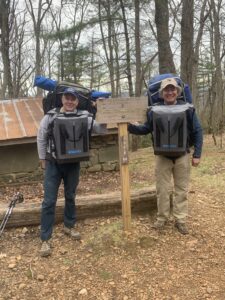 Our crew at McGill not only enjoys working on and developing trails for the benefit of the community, but they also enjoy using the trails themselves.

Past McGill President and current Senior Principal Joel Storrow said that being out on the trails and in nature “is just the best way to leave the grid to chill and decompress.”

“I try not to take my cell phone, as unfortunately these days there is coverage where you least expect it. I prefer not to be bothered by the outside world while I’m out in nature,” he noted.

The Appalachian Trail Conservancy (ATC) has been promoting Trail Magic for more than 90 years. Joel explained that, “Trail magic is support and kindness to thru-hikers along the trail. It generally involves serving food and drink but is always unexpected and can be magical and inspiring to those hikers needing a mental or physical boost. My brother, Alan, and I traditionally perform trail magic at the Little Laurel Shelter either the first or second week of April each year. Little Laurel is 292 miles into the Appalachian Trail (AT), such that thru-hikers who begin at the southern terminus will reach Little Laurel around the first part of April, which means we can serve a large contingent of hikers as they pass through.” 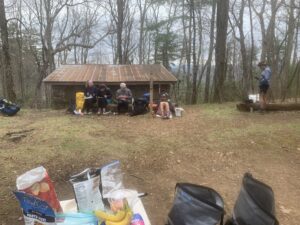 Joel shared a story about a time when trail magic really resonated with him, “About 10 years ago, we were serving food and drink at Little Laurel. I had just returned from New York City and toured the 9/11 memorial. While there, I purchased a wrist band which I was wearing on trail magic day. A woman came up to me and asked me about it. She said her brother had died in the attack and she was thru-hiking the AT that year in his memory. I immediately offered her the band to wear the rest of way and she broke down in tears.”

When asked about an unexpected experience he has had on the trails, Joel said, “During trail magic this past April, a trio of guys serenaded the group while we served them. The really special thing about it was they had met each other for the first time on the trail and decided to form a traveling barbershop quartet of sorts. They specialized in hip hop.”

Click here to read more about how our award-winning land planning and recreation team is working to create spaces that tie together the natural and built environments and encourage community outdoor recreation.