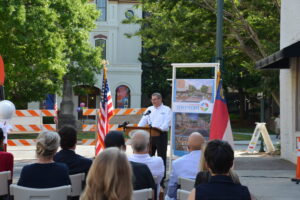 On June 15th, McGill attended a groundbreaking ceremony to officially kick off the construction of the new Concord Downtown Streetscape project. Andy Lovingood, McGill President, provided remarks, and a number of McGill personnel who were involved in the project were in attendance.

McGill Project Manager Carrie Cranwill said, “The importance of McGill’s attendance at groundbreakings and ribbon cuttings, such as this one, is to show our support for the community, and to celebrate the milestone of the project starting with the City staff that worked so hard on the project during the design process.”

MCGILL’S INVOLVEMENT IN THE PROJECT

McGill was chosen to aid the City of Concord with streetscape enhancements to Union Street. In the City’s Downtown Master Plan, this endeavor was designated as a catalyst project that drastically alters the corridor by introducing numerous new options for the expansion of public space.

Throughout the design development and final design phases, McGill collaborated with City officials to produce a comprehensive set of construction documents for bidding by the City. 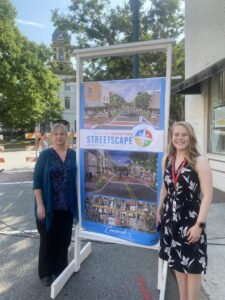 This project design includes a complete renovation of the streetscape, including new sidewalks, tree planters, streetlights, site furnishings, public art, curb line adjustments, and crosswalks that are in compliance with the Americans with Disabilities Act (ADA).

“The overall design for downtown eliminated a fair amount of on-street parking which enabled the creation of larger pedestrian areas,” explained Carrie. “These new pedestrian areas will provide places for residents as well as visitors to congregate and enjoy outdoor dining which you would not be able to do within a standard sidewalk width. There are also several new residential projects currently under development and these areas will serve downtown residents by providing space to take a walk, meet other people in the community, and to just have a place to go sit outside since they will not have a traditional yard space. I think we all learned the value of outdoor space during the pandemic when some of the traditional indoor gathering places no longer felt safe and welcoming.”

Downtown areas serve as the heart of a community — not only are they leading economic drivers, but they also hold historical and cultural significance, and are positioned as a location that is highly inclusive and resilient to changes and growth. 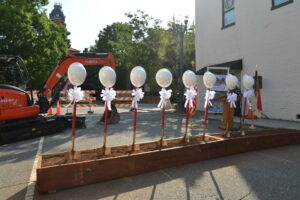 McGill recognizes the value of safe, accessible, and welcoming downtown areas. We aim to design venues that not only benefit local community members, but also attract tourists and set businesses up for success. In addition, we are thrilled to have been an integral part of designing a streetscape that allows Downtown Concord to thrive.

“The reward for completing these kinds of projects is providing a space that transforms the downtown area for businesses, residents, and visitors. It’s great if you can revitalize an area by bringing in new consumers and create a social hub that supports the local downtown businesses,” said Carrie.

McGill’s streetscape initiatives can transform a downtown area into a desirable location for investment and pedestrian activity, from main streets to a busy city corridor. Click here to read more about the work our land planning and recreation team is doing to create spaces that encourage community connectedness.

Check out the related articles and case study below: